Turning a chestnut fallen from a tree into a chestnut bonsai
In our bonsai course you learn a lot about caring for, repotting and pruning bonsai trees. What’s less covered in our course is growing a bonsai from seeds. Also for beginners it will be very interesting to grow from seeds. It’s a way to witness the entire growing process from seed to tree. A downside is that it will take quite some time until your tree is big enough to work with. Punica Granatum and Zelkova Serrata are trees suitable to start with.

On this page we provide information about growing your own chestnut bonsai. It’s an easy tree to start with. They are hardy, grow fast and suitable as a bonsai. Most deciduous seedlings are ready to be repotted after about half a year. This is a cheap way to start up, so not much is lost if it doesn’t succeed.

The (white) horse chestnut is a hardy, deciduous tree often seen in forests, parks and next to roads. In Autumn the chestnuts fall from the tree. The chestnuts grow in a prickly green husk. The hust often breaks apart when the chestnuts falls on the ground, causing the beautiful brown chestnuts to roll out.

Collect a few undamaged chestnuts to seed in a seedbox or any other suitable box. Fill the box with regular soil. The chestnuts should be planted deep enough to be covered completely by soil. The soil should be kept moist. You can seed several chestnuts, later on you can pick out the best to work with. Cover the box with plastic foil or a piece of glass. Place the box in a sheltered spot outside. Keep an eye on the soil. When the soil gets too dry, water the soil with a spray bottle. As in nature the chestnut will need a cold period, so even when it gets colder, leave the box outside.

After a while two round leaves will appear. These are cotyledons, which will be followd by the first real chestnut leaves. Once these leaves are fully grown the chestnut can be potted for the first time. Be careful not to damage the roots when taking out the little plant. Pulling too rough will cause tge roots to break. If the original chestnut is still attached to the plant you can just leave it there. After a while it will fall off by itself.

The little plants are now ready to be potted in little pots with regular soil. Don’t push down the soil too tight, the roots shoud be able to breathe. Cover the soil with water, wait until the pot stops leaking and place the plant outside. This young plant will not be able to survive frost, keep this in mind in case it’s cold outside. They should also be protected against too much rain. No plant grows the same, some grow fast, others slow. Some trunks grow straight, others squirm as they grow.

After a year these plants will be 10-15 cm tall. In the following year when the chestnut bonsai sprouts, nip off the leaves soon after they arise. During this first grow period a maximum of three pairs of leaves should be left. You can keep dormant buds. These buds grow smaller leaves, so leaving them is a natural way of getting smaller leaves as well. Nip off leaves until July. Leaves growing after this month should be left until the next year.

When repotting the plant it is recommended to remove 2/3 of the taproot. In the years to come the frst leaves should be pruned, but keep a piece of the stems. Pruning will give branches a chance to grow. Fter four years the tree can be wired. Repeating this process for a few years will give you a beautiful tree to start with. It’s wise to grow several chestnut bonsais. In case some don’t survive you still have other trees to choose the best from to turn into an individual bonsai tree. Or you can use several trees to create a bonsai forest. 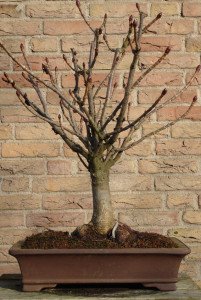 This chestnut bonsai is about 20 years old.
The small chestnut bonsai can be kept in the sun, but not for an entire day. Make sure that the soil doesn’t dry out. In Summer it’s best to move the tree into the shade during the afternoon. This will prevent leaves from burning. Beginning of October is a good time to place the tree in a sheltered spot. The tree should be protected against cold wind and heavy frost.

In case the soil freezes during Winter, get the plant inside. Place the tree in an unheated area and spray the soil with cold water until the soil isn’t frozen anymore. Once the soil has dried up the plant is ready to go outside again. Unless it still freezes too hard, then place the plant an unheated spot indoors.

In the beginning when the plants are just sprouting, it won’t be necessary to use expensive bonsai-fertilizer. You can make use of organic fertilizes, for example from cows.

There are several kinds of seeds available. Some seeds can be planted without any pre-treatment. Other seeds do need pre-treatment. This is called stratification.

Stratification can be done in two different ways. The first method is mixing the seeds with sand and place them in a pot. The pot should have a hole in the bottom to prevent excessive rainwater to build up. During Winter the pot should be kept outside, no matter how bad or cold the weather. In Spring these seeds are ready to be sown.

The second method is storing the seeds in the freezer for three weeks in plastic bags. This should be done when Winter is coming to an end. After the three weeks the seeds can be sown. There are alsoseeds that are capable of surviving 5 degrees celsius below zero. These seeds can be soaked in water for 24 hours and stored in plastic bags in the refridgerator for four weeks. On internet you can find which seeds need which method of stratification. 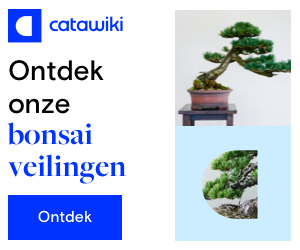